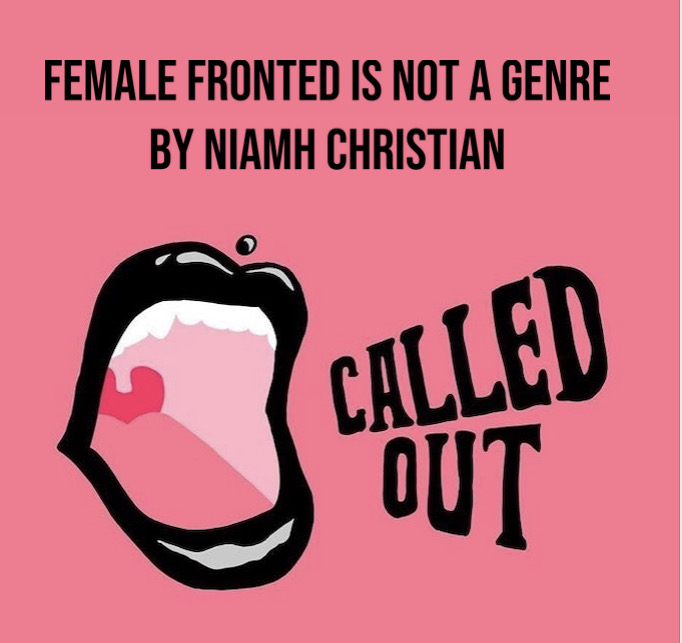 We’ve all seen in our favourite music magazines, on Spotify playlists, on music television channels: Female Fronted bands. Bands of all different types of genres from pop-punk to metalcore, all in the same playlist. Bands with mostly male members but a female front, standing out as ‘feminist’ icons in the rock and alternative world. It’s as if it’s still shocking that women are (and always have been) creating Rock music.

As one of my personal favourite female fronts, Courtney Love once said:
“We care about our boy rockstars more than our girl rockstars”.

Which sadly does seem quite true. Sadly playlists and genres are pretty male-dominated, with the odd female-fronted band thrown in every now and then. It seems acceptable to group all bands with a female lead into one box. So rather than being recognised for their genre, they get recognised by the gender of the lead singer.

I completely understand the reason you see ‘female-fronted’ and not ‘male-fronted’ being highlighted as a genre. Even now the rock and heavy music scene is overtaken by men, so yes I understand the need to highlight women in rock. However by grouping bands of all different genre’s into a ‘female-fronted’ category, it actually says nothing about their sound. It is confining them to nothing than gender.

Also, if this is about representing women in Rock music, shouldn’t we ask them how they want to be defined? Because I can hands down say I have never known a female rockstar who wants to be defined by her gender rather than her music.

I’ve heard so many times people argue that women’s voices have a different sound to males, however, I think we can all agree that those stereotypes are not always true. I can’t even tell you the amount of times I’ve misgendered someone from the sound of their singing voice. Not all men have low singing voices and not all women have high-pitched singing voices.

I feel like it also needs pointing out that women can be in a band and NOT BE THE SINGER! Female bass players exist; female guitarists exist and as shocking as it may seem, female drummers exist too. It seems that we only recognise women in Rock music when their face is at the front. We class any female-fronted band in the ‘Women in Rock’ and playlists similar, even if the rest of the band is male. However, bands with women playing other roles often don’t get the same recognition.

Surely by now, we should be living in a progressive enough world for women to be judged the same way as men are in the music industry. Let’s start categorising female-fronted by genre and message rather than their lead’s gender. And let’s start giving female guitarists, bass players, drummers and whatever else as much praise as we give our female singers.

I hope that one day we live in a world where female artists are as highly recognised as male, however, I feel like that won’t happen till we stop acting like it’s unique to have a female member in a Rock or Alternative band. Women have been creating music of all genres for so long, it’s about time we started categorising them for their music and style but not their gender.