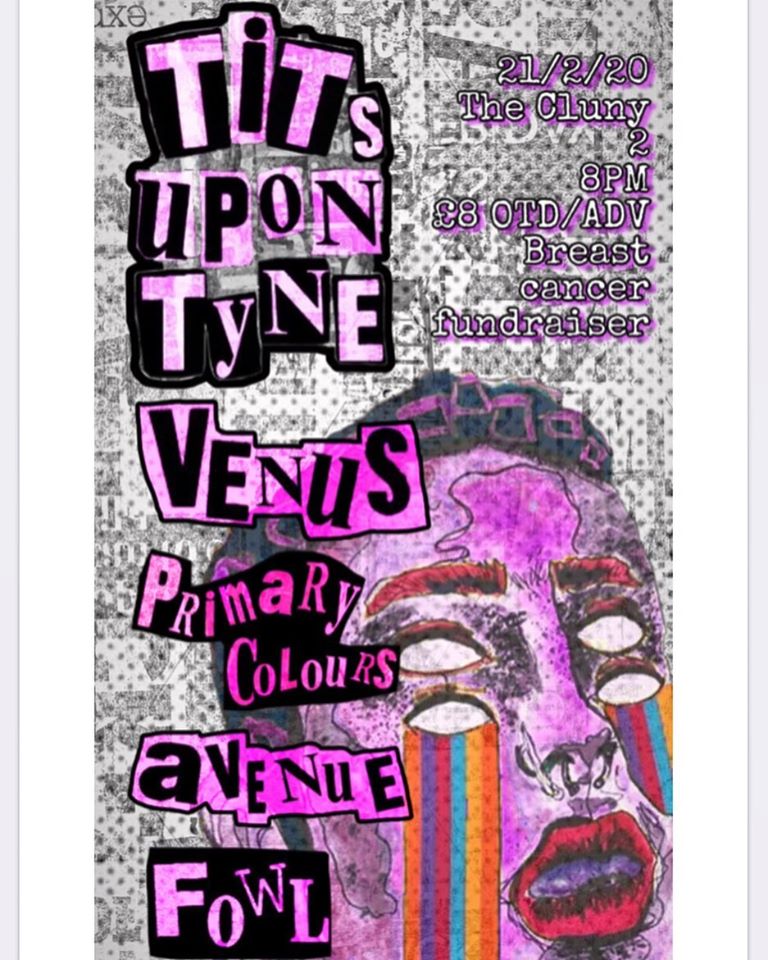 By Ryan Wallace – find his work here at WASTELAND MUSIC

The Tits Upon Tyne charity event raised just over £300 in aid of breast cancer research last February. Here’s a review of all four bands that played the event.

Travelling hour-long bus journeys from Blyth to Newcastle each week to play small venues isn’t an easy job. However this is only a minor hindrance for Fowl, who have worked relentlessly to distribute their enraged post-punk sound across Newcastle’s local scene.

Powering through a setlist raw and energetic songs, Fowl played to their strengths and delivered a raw post-punk energy to the stage. One of the most unexpected and enjoyable aspects of the band’s recent setlists has been the introduction of guitarist Matthew McDonnel’s vocal work on some songs. Towards the latter half of their setlist, Fowl changed gears and introduced synths alongside the guitarist’s vocal work to great effect, leading a diverse and interchangeable sound, whilst still retaining their edge.

Placing Fowl as the opening act helped to set off Tits Upon Tyne II with a dose of raw energy and aggression. Their changeup in sound mid-setlist only further begs the question of what Fowl will strive for next.

Avenue are solely responsible for providing the most sweat-drenched, adrenaline fueled performance to ever grace the Cluny 2 stage.

There is little doubt that much of the Tits Upon Tyne audience would be surprised if singer/guitarist Blaine Armstrong began spitting blood halfway through their enraged performance. The band easily succeeded in bringing the event atmosphere to a new level with their aggressive post-punk sound, delivering another shot of energy in each song.

The band enjoyed an incredible bond between them and the audience, as they managed to power and scream their way through a setlist of moshpit-inducing cuts. Each song still retained the thoughtful lyricism that Avenue strives for, but their chemistry as performers brought their sound to another level.

As a result, Avenue remains a band to watch out for on the local scene. Their live performances provide an intense and gritty post punk atmosphere with the intention of allowing the crowd to let loose in any which way they please.

The buildup for Primary Colours’s setlist proved to forge an atmosphere of anticipation and hopefulness. The band are no strangers to the Tits Upon Tyne audience. Their performance at the last event saw them whipping audience members up into a fury like no other, and this standard proved a lot to be desired.

Don’t be easily fooled by their colourful indie bangers to the stage, as the energy and personality that the band members bring to these songs make them a completely different experience live. Primary Colour’s set bolstered an incredible amount of energy and drive through vocalist and bass player Finlay Ireland. The young musician has easily cemented himself as a perfect frontman and a fitting leading counterpart to the band’s sound. Various cuts from their debut LP Tail Lights made a welcome appearance in their set, as did older songs such as The Daisy and Guava.

With a new album having already been released earlier this year and an incredible amount of support from the local audience, Primary Colours have proved that they have easily cemented and settled into their sound, it’s only a shame we didn’t get to hear them cover The Brian Jonestown Massacre this time.

Living up to Witch Fever’s previous headlining performance at Tits Upon Tyne was no easy task. Fortunately for Venus, their expertise in pushing a loud and raucous sound upon the Cluny audience made them more than worthy headliners for the event.

For many of the crowd, this was their first introduction to Venus. As such the band did not hold back on delivering a synthy, garage rock infused vibe which echoed the energy of the likes of Sleater-Kinney and L7. Add to this an unrelenting feminist stance and you have one of the most enthralling bands to play this event so far.

In particular, the chemistry between singer/rhythm guitarist Grace Kelly and lead guitarist Jess Ayres managed to provide an incredible wall of sound and punk energy. Riffs and guitar licks played off one another to give Venus’s more energetic songs an extra kick of energy and passion to compliment their slower cuts perfectly.

Ultimately Venus proved to the Tits Upon Tyne audience that they can deliver an atmosphere of raw energy and aggression like no other and have placed themselves as an exciting contemporary take on the riot grrl sound.